We’re happy to announce the upcoming release of OpenNMT-py 2.0!

The major idea behind this release is the – almost – complete makeover of the data loading pipeline . A new ‘dynamic’ paradigm is introduced, allowing to apply on the fly transforms to the data.

This has a few advantages, amongst which:

You can check out how to use this new data loading pipeline in the updated docs and examples.

All the readily available transforms are described here.

Given sufficient CPU resources according to GPU computing power, most of the transforms should not slow the training down. (Note: for now, one producer process per GPU is spawned – meaning you would ideally need 2N CPU threads for N GPUs).

A few features are dropped, at least for now:

Some very old checkpoints with previous fields and vocab structure are also incompatible with this new version.

For any user that still need some of these features, the previous codebase will be retained as legacy in a separate branch. It will no longer receive extensive development from the core team but PRs may still be accepted.

OpenNMT-py v2.0.0rc1 is available as of now on the github repository, as well as via pip .

Feel free to check it out and let us know what you think!

Massive thanks to @Zenglinxiao for his work on this. Thanks also to @Waino for his base implementation and ideas.

Very nice to see that there is still a lot of active development! We will not be upgrading soon as source word features is an important feature that we extensively use, but I do appreciate the continuing work on the library!

Thanks Bram for your feedback!
We will most probably to put back source feature support at some point.

Hi,
You mentioned source word features were dropped from this version, at least temporarily. Do they imply an issue on the fly? When do you expect to add them?
Thanks

Do they imply an issue on the fly?

Not sure what you mean, here. No particular issue, except that you can’t use them for now.
If you’re asking about why it was dropped, it’s because it requires some adaptations in the new dynamic inputters pipeline, that we didn’t get to yet.

It should not be particularly difficult, just requires a bit of time and testing.
I think the main remaining topic is the vocab building of the features field(s). (The _feature_tokenize stuff is actually still there, but won’t work without the proper adaptations upstream.)
Feel free to contribute if you feel like it.

Hello All, @francoishernandez
I used to train using Opennmt-py (last version 0.9.2), I see lots of updates have been made since then.
I have couple of doubts and confusion
My previous pipeline used to be like this:

I can see now there is no preprocess.py (build_vocab.py, is it the same ?)
Can anyone tell how exactly to achieve above in release.?

You might want to have a look at the updated documentation, especially:

Thanks @francoishernandez for replying.
Most of the things I understood from above docs. However few doubts:

Where exactly do we define the sentencepiece arguments?

The tokenization options are listed here.

Also, the Translation example has a sentencepiece configuration with the aforementioned options.

Ok I am trying to make it work for me. Also I am currently using OpenNMT version 0.9.2(basically I forked out then). Should I take the latest pull and continue after resolving conflicts accepting incoming changes?That should be okay right. Or is it highly advisable to clone afresh. (PS: I have added lots of changes in the forked repo)

Only you can know the extent of the changes in your fork. If you want to merge the 2.0 changes you will need to look carefully at the various changes. It probably won’t just be some simple conflict resolutions.
All the major structural changes happened here for reference:

Also, it will depend on which parts you made changes to. For instance, most changes happened in preprocessing / training parts, but everything related to inference, models, optimizers, etc. did not change.

In the OpeNMT context I made changes only to preprocessing (added word tokenizer and sentencepiece tokenizer as part of preprocessing pipeline).
For training I was directly using python train.py with all the arguments. I checked the config yaml. I believe its same only. Only difference is now it is using the config yaml only, previously the config arguments were part of train.py

Then you can probably just drop your changes and start anew from 2.0, as all this can now be done on the fly when training.

sure @francoishernandez
I will try it once.
Thanks for help

@francoishernandez
Is there a way to see the transformed corpus after the tokenisation part.
It should be saved in save_data: data/wmt/run/example
However, no such file is getting generated for me, training is getting started directly.

I am having this weird problem while merging my branch with OpenNMT master(latest one), few files are not coming after merging and resolving conflicts. eg. onmt.utils.earlystopping

Is there a way to see the transformed corpus after the tokenisation part.
It should be saved in save_data: data/wmt/run/example
However, no such file is getting generated for me, training is getting started directly.

Have a look at the n_sample opt:

I am having this weird problem while merging my branch with OpenNMT master(latest one), few files are not coming after merging and resolving conflicts. eg. onmt.utils.earlystopping

Not sure to understand your issue here. The file you mention for instance has not been modified for two years, so it’s ‘normal’ that it’s not affected by any merge. Anyways, this is more of a git issue than an OpenNMT one. 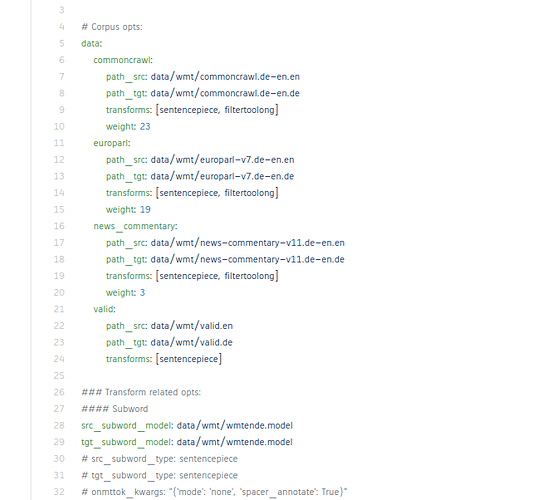 In the data: commoncrawl, in transform it is mentioned sentencepiece tokenisation
What does this refer to then src_subword_type which is mentioned as a separate key.Is it only for pyonmttok based model?

There are two different things here:

BPE here refers to subword-nmt like bpe (the model is in fact a list of merge operations in a plain text file), whereas a sentencepiece(bpe) model will be in the sentencepiece format.

sure got it @francoishernandez
thank you