Last July 2022, Meta released “No Language Left Behind”, a paper with opensource models that support 200 languages. No matter what follows it is a great paper and gives a lot of possibilities to integrate low resource languages.

I wanted to assess the performance of these models with regards to their claim (breakthrough … +44% improvement… SOTA…).
I focused on the table 36 page 109 on which they calculate averages and measure some performance versus previous work or SOTA.

First of all, I only looked at WMT (table 36a) because IWSLT (table 36b) is based on a completely different task with far less data in the datasets. 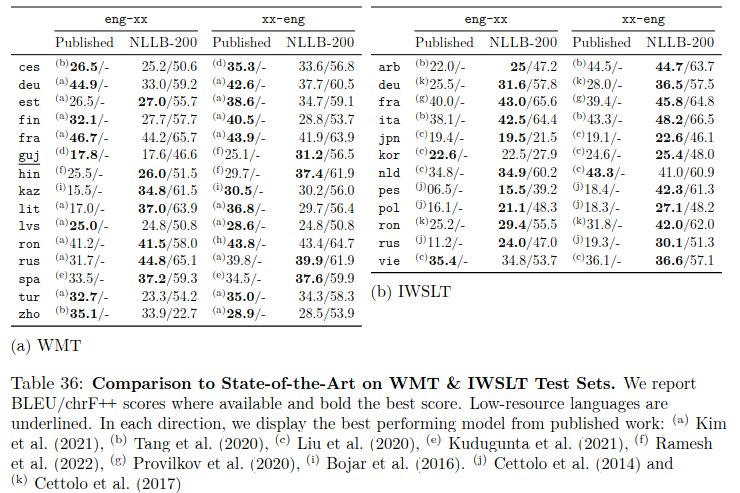 It is unclear whether comparison are versus “similar work” on multilingual research or on absolute SOTA. So I wanted to compare scores versus real SOTA.

Let’s start with the ugly and the bad.
Six lines of the table 36a are based on WMT19. Starting in 2019, WMT released specific directional test sets which means that the RU-EN test set is NOT the reversed EN-RU test set. Unfortunately they messed up and used the wrong test set in the EN-XX directions. Anyway, I recomputed scores with the 3.3B model (when they obviously report everywhere scores with the 54B model).

As I said, the “from ENG” scores of the second column are wrong. Even though it was misleading for some languages, it was quite obvious for KK/LT as well as Russian (by the way SOTA 36.3 is the Fairseq paper from WMT19. It would have been weird to beat it with a multilingual model).
For “into ENG” scores from the paper are slightly higher than the 3.3B since they reported figures with the huge 54B model. The SOTA scores are taken from the http://wmt.ufal.cz/ website that gathers all WMT history.

I do not recall exactly where but I read somewhere that the output of NLLB for Chinese was quite bad. There might be some tokenization issues but I fear that the model is not really good with this alphabet.

Now the good and the really good.

Let’s have a look at the WMT18 languages.

Again the column “Paper” reports scores with the huge model and scores are consistently higher than what I computed with the 3.3B model. We can observe that scores are close to or better than SOTA from WMT18.

English are French are run with WMT14 test sets whereas Spanish is done on WMT13.

Overall the results for those 3 high resource languages are very good but we can see that scores decrease significantly when the size of the model decreases.

We will release OpenNMT-py checkpoints of NLLB-200 and if some users are willing to test finetuning this model, it might be interesting to see the results.