Curriculum Learning in the Age of Transformers - Parts I-II

In this strange time of isolation, I found the time to spend more time with my own GPU-server and to experiment on Curriculum Learning (Bengio, 2009) which is together with Lifelong Learning (Thrun, 1996), two incredible ideas that I really want to believe in to drive our daily task on design and training of deep neural networks.

This study is also stimulated by a coincidental confinement reading of the excellent Dune prequel series Legends of Dune where Erasmus, the only independent robot, strives to understand humans - and in particular how they learn and think. Can we, reciprocally, understand how the omnipotent Artificial Intelligence (Omnius in the Legends of Dune) managed to learn, and could we help avoiding it to take a full control of the universe through a more educated teaching process 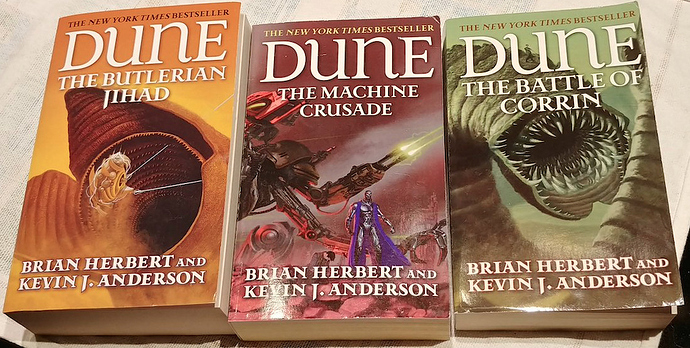 I will publish this topic in several posts. They will be coming, as any good story, with enough time between parts to raise expectations

I am using this forum for presentation of this work, as a way to share code, results, and as a call for feedback and new ideas…

Part I - Introduction on Curriculum Learning

Serena had been gazing into Manion’s large, inquisitive eyes, but turned her head toward the robot’s polished mirror face. “He will be only three months old tomorrow. At this age, he can’t do anything for himself yet. He has to grow and learn. Human babies need to be nurtured.”
“Machines are fully functional from the day of their programming.” Erasmus sounded smug.
“That explains a lot. For us, life is a gradual developmental process. Without nurturing, we can’t survive,” she said.

Curriculum Learning, introduced in (Bengio, 2009) is an interesting training strategy idea with some intended similarities with human learning/animal training process (see shaping). A deep neural network is trained in several phases in which examples are presented in increasing complexity order.

For Natural Language Processing perspective, the idea is very attractive and is matching our own human learner experience. For instance for baby talk or foreign language learning, we have a natural intuition that increasing the level of difficulty of the presented examples can facilitate the learning process. In any method for learning a foreign language, for the first years, learners are dealing with a limited vocabulary that progressively expands. Here the perceived “difficulty” is simply the size of the vocabulary. However, even in that simple language learning context, it is not so easy to formalize what is the “difficulty”. Some metrics like the Gunning-Fog Index have been empirically defined for English language to estimate “the years of formal education a person needs to understand a text on a first reading”. Also, even with an appropriate metric, it is not totally obvious how one can select real internet text in a human language teaching curriculum (Sharoff, 2008).

In addition, as usual when dealing with deep learning models, let us be careful about intuition: if humans are obviously limited for learning massive amount of vocabulary, it is doubtful that modern deep learning models suffer from the same limitation, however we can imagine that the progressivity of the training process could help structuring better the captured language knowledge inside the neural network. The original paper, inspired from the concept of “shaping” (used in particular in animal training), suggested that this process helps to find better (and faster) local optimum of a non-convex training criterion.

For natural language processing, the task covered in the original paper is a language model, on a simple yet effective model that has inspired modern word embedding learning methods (Collobert 2008).

Several recent papers revisited the concept of Curriculum Learning for neural machine translation and are bringing some modifications to the original idea - more complex curriculum, sampling strategies, or self-estimation of the difficulty… in the line of the original paper, these papers claim that their approach helps for a faster convergence of NMT models and that can even bring quantitative benefits. These approaches are either used to train a NMT model in comparison with standard training process, or for domain adaptation.

In this post, I present my own experiments around the concept, first by re-implementing original paper and commenting on the results, then integrating in OpenNMT-tf the contributions from the recent papers and reproducing most of the experiments covered in these papers. As a teaser/spoiler, I must say that the results on modern transformer architecture are however mostly disappointing, and I am showing that some of the published results are actually deceiving and some are even not really credible, and I am concluding this post with my own interpretations and potential ideas for improvements.

Glad to see you are making such constructive use of your lockdown. I had great ambitions but have spent more time than I should reading the Reacher novels

“Capacity for information is the key. Machines will absorb not only more raw data, but more feelings, as soon as we understand them. When that happens we will be able to love and hate far more passionately than humans. Our music will be greater, our paintings more magnificent. Once we achieve complete self-awareness, thinking machines will create the greatest renaissance in history.”
— Erasmus, Legends of Dune

The original paper, published in 2009, is using a very simple and tiny (for today standard) neural network as described in the following figure: 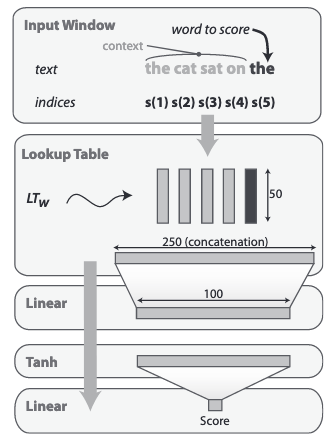 Unlike precedent approaches on neural language modeling and following (Collobert, 2008), this language model is not trying to predict the probability of the word to score, but is instead implementing a max-margin loss function and using ranking as an evaluation criterion.

The max-margin loss function is defined by the following equation:

where s is the word we are scoring (last word of the window) and w is a counter-example word that is randomly sampled from the vocabulary - and the loss formula simply tries to push the score of the context with this random word w, being at least 1 smaller than the score of the context with the original word s. This naturally teaches the neural network to rank the possible words that can follow the context. The higher score, the most likely.

The evaluation of the performance of the network is then naturally performed using a ranking criterion: evaluated on all the possible vocabs following a given context, what is the rank of the actual word ?

This simple architecture has been a key milestone in word embeddings development since the most of the parameters of the network are for the lookup table (1M parameters for a 20k vocab, compared to 25100 additional parameters composing the 2 downstream dense layers) - what the model learn is basically a good word vector representation fitting the ranking task.

The training process is pretty straight forward: in the original paper, vocabulary are lowercased plain words, limited to 20k most frequent. The training corpus is 2008 English wikipedia, making 631M 5-word windows (excluding windows with out of vocabulary tokens).

The baseline training (no-curriculum) is running for ~3 full epochs on the training corpus, iteratively sampling pairs of (s,w) used to compute loss for standard SGD optimization.

In constrat, the Curriculum Learning performs 3 iterations on the same data, but for each iteration, the vocabulary is limited to 1/ the top most frequent 5000 words, 2/ the top most frequent 10000 words, and then the full vocabulary. In each of these iterations, the training windows is therefore limited to the windows with only tokens part of these restricted vocabulary (respectively 270M, 370M, 638M). For the evaluation, the complete vocabulary is of course kept.

The results are the following: 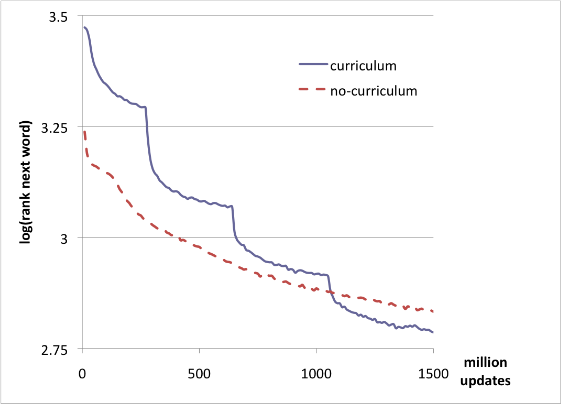 The authors conclude: “we observe that the log rank on the target distribution with the curriculum strategy crosses the error of the no-curriculum strategy after about 1 billion updates, shortly after switching to the target vocabulary size of 20,000 words, and the difference keeps increasing afterwards. The final test set average log-ranks are 2.78 and 2.83 respectively, and the difference is statistically significant”.

Interpretation of the result:

Last, it is interesting to note that the model is really tiny in our 2020 standard, with 1M parameters, the model is 500-1000 times smaller than a real scale transformer model!

My reproduction of the experiment

For fairness of the recent paper reproduction process, I did reproduce the same network and experiment. The commented code is here.

However, to reduce the differences with following experiments on Neural Machine Translation, I am using the same preprocessed English corpus as the one for the reference WMT English-German training defined here. The details are:

For the LM training with 20k top vocabs, this makes a total of 117M 5-token windows.

Let us note that working with sentence piece tokens, the scoring task with 4 context token (only!) is far more complicated since the actual context is smaller than the 4 full words in the original experiment, also the actual covered vocabulary is far larger (20k out of the total 32k sentence piece vocab compared to 20k words out of … 840791 different tokens on simple lowercased tokenized corpus). So we expect the Language Model to struggle far more.

For instance for the sentence “Airbus says the competing version of its A350 will carry 350 people in 18-inch-wide economy seat laid out 9 abreast.”, OOV and the extracted windows will be:

The results directly exported from tensorboard are represented by the following graph:

These graphs show the longrank evolution with the number of presented examples - the difference between each experiments is the covered vocabulary evolution as represented by the following graph: 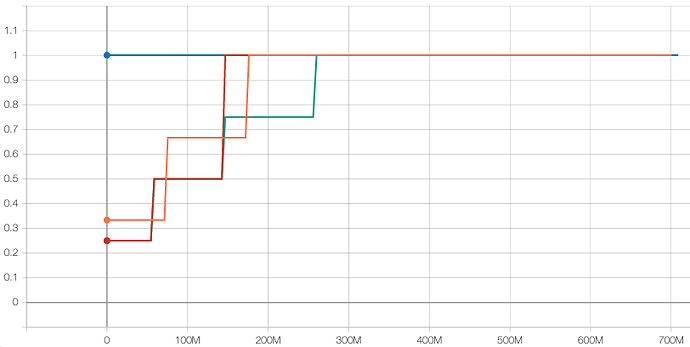 The parameters used for this experiment are given by the following configuration:

Exactly like the results of the paper, we observe the same impact of the curriculum learning.

As hypothetized however, the heads up given by the curriculum learning is gradually reducing and is eventually totally wearing out.

Some independent effect that is more clearly seen on this experiment is that the very first phase of the learning seems to stall before finally kicking out around 50M updates. During this initial phase, very clear on the training loss evolution below and that we can also observe looking at the test outputs, the model seems to just be learning to sort the vocabs which is indeed a easy first quick win. 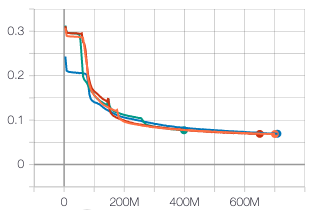 Some examples of ranked tokens after 50M updates: