I’m trying to run the example training script to train a English-German model. I’m running Ubuntu 20.04 with a GeForce GTX 780. On a fresh Ubuntu 20.04 instance I checked the box during installation for Ubuntu to install proprietary drivers and the nvidia-driver-440 package was installed. Then I installed Docker (package from apt) and installed NVIDIA Docker support. I ran the TensorFlow Docker image with this command:

Inside the Docker container I Installed OpenNMT: 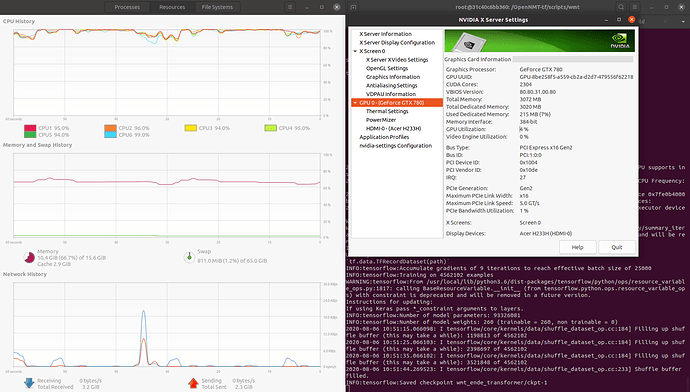 I can’t tell if this is some sort of drivers issue, an issue with my TensorFlow installation, or an issue with OpenNMT. Any help greatly appreciated!

I had previously tried installing the GPU drivers (from the NVIDIA website), CUDA, cuDNN, and TensorFlow outside of Docker and running the training script but had the same problem of the GPU not being used. My next step was to try running the OpenNMT Docker image and see if I can get that to work but I’d like to have the control of running OpenNMT outside of Docker.

Thanks for any help!

You should enable the GPU when starting the Docker container. See NVIDIA’s documentation:

@guillaumekln good catch thanks. That was definitely an issue but after fixing it the GPU still isn’t being used.

What I’m trying to run is:

on Ubuntu 20.04 with NVIDIA drivers, Docker, and NVIDIA Docker support installed. Then inside of the Docker container running:

When running this all of my CPUs get used up but the “GPU Utilization” is normally ~3% and never goes over 15%.

It seems like its having an issue connecting to CUDA even though it should be preinstalled in the Docker image.

Does the command nvidia-smi work inside the container?

It does, it looks like there’s definitely something wrong with CUDA. Looking at the TensorFlow Docker documentation again I think I need to include the latest-gpu tag for the Docker image changing the command to start the Docker container to:

I’ll give this a try and post if it works.

Using the wrong Docker container ended up being the issue, since my GPU is to old to support CUDA 11.x I ended up using nvidia/cuda instead of the tensorflow container:

Thanks for the help @guillaumekln!